Bench Elementary School > About Us 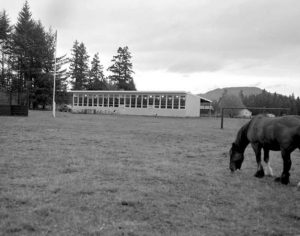 Bench Elementary School was founded in 1872 and enrolls approximately 370 students in Kindergarten through Grade 7. Bench has a pleasant rural setting, and serves students from families with diverse demographic backgrounds. Approximately 8% of Bench students have an aboriginal heritage.  Special needs students are integrated into regular classes whenever possible and appropriate. As is the case in many other schools in the Cowichan District, the enrollment at Bench went through a decline at the start of the last decade (282 students in 2003/2004) that was followed by a general increase in enrollment up until 2009-2010 despite the move of grade 6 students from ‘South End’ elementary schools to George Bonner Middle School following its renovations in the 2006-2007 school year. When this change occurred the enrollment at Bench was projected to drop by approximately 60 students. However, the relocation of the Cowichan Station Rural Traditional Program and the attendant move of some of those students to Bench, as well as recent real estate and housing developments in the Cowichan Bay area compounded to mitigate the expected enrollment decline. During the 2011-2012 school year enrollment would have dropped compared to 2010-2011, however our enrollment went up by approximately 24 students over what it would have been in previous years due to the implementation of Full Day Kindergarten. In January 2013, the enrollment at Bench was 323 (with Full Day Kindergarten) compared with January 2012, with an enrollment of 316 (with Full Day Kindergarten) compared with 309 in January 2011 (without Full Day Kindergarten), 326 students in January 2010, 327 students in January 2009, 305 in January 2008 and 310 in January 2007. At the end of the 2012-2013 school year, there was a re-organization of the district which eliminated middle schools and added Grade 6 students back into elementary for the 2013-2014 school year with Grade 7 students to be added in September 2014.

Promising practices at Bench include a guided reading program for students in grade 1,2 and 3, home and accelerated reading programs, Achieving Excellence in Writing With Blended Structure and Style, daily physical education for all students, and weekly whole school runs. Our Resource and Learning Assistance Program is of great benefit in addressing learning deficits that many students experience. We are going into our fourth year of focus on implementing Assessment for Learning practices and our second year of implementing aspects of The Daily 5 and we are excited about the prospects that they hold for enhancing the learning of all of our students. In addition, with the generous support of our Parent Advisory Council, we have been able to upgrade our eMac computers in our computer lab to iMacs and we have been able to install SMART boards in all of our classrooms. The effect on student engagement of SMART board technology is very promising.

Press the drop-down below to switch to another language.